“One of the Northwood’s best and busiest musicians” is how the Northwoods Live Music Calendar describes Scott Kirby, an alternative blues rock singer/songwriter living in northern Wisconsin. Don Burnstick describes what Kirby has simply as “mojo”. It’s that mojo that is Kirby’s signature sound.

Kirby has been exploring guitar and writing songs since the age of twelve. Kirby’s wide range of influences helped hone his individual voice in songwriting. He notes his larger inspirations to be Bob Dylan, Neil Young, REM, Tom Petty, Stevie Wonder, and Johnny Cash. Band Camp Diaries says, “He has a unique approach to blending melody and attitude that makes me think of modern artists such as The Fray or Daughtry, just to mention a few.”

Kirby has nine album releases to his name (Long Way Home, Apple Love, Good Morning Jo, B Tapes Vol 1, A Day On The Lake, Live at CT’s Deli, November Snow, live at the little brown jug, ep 2018), and amped up his sound with his 2017 single “Love Is Just,” produced by Grammy winning producer Jeff Bova (Album of the Year, Celine Dion, Falling Into You). Dancing About Architecture wrote: “’’Love Is Just’ is eloquent, in a solid and dependable sort of way, a combination of keeping things simple, though far from simplistic, and that fantastic voice of his. Letting the music breathe and the vocals soar, a vocal which seems to blend romance and honesty and a soulfulness with a delivery that most rock singers would kill for.” From Skope Mag: “When they said that music is an expression of our emotions with the vocal and or with instruments, I never really got to understand it until I listened to ‘Love is Just’ by Scott. The song is a pure expression of emotion at play.”

Recently Scott let his inner Blues Rock persona shine in his single, ‘Something to Move.’This charged track stirs up swampy, gritty images and reminds us that the Blues are timeless. A modern take on the backbone of popular music, ‘Something To Move’ is a driving, vivid depiction of life outside popular culture.

Here is what taste-makers are already saying about this slammin’ track:

“Scott Kirby’s “Something To Move” is the definition of a perfect bar jam.”
“Scott’s got a solid scorcher here that’s bursting with rhythm & passion at the seams…another great tune from what’s clearly an artist that gives everything he’s got to his music, every time.”

Kirby dropped a quirky, upbeat yet introspective song, “Simple Life”, that had summer written all over it. Kirby explains, “I’d been on a trip to eastern Europe and bought a guitalele in Dubrovnik near the end of our journey. After getting home, I was reflecting on my trip and how I was feeling in general. I fell in love with Bulgaria and the fact that everyone has a garden instead of a lawn. I had literally just dug up my front yard to make a garden for planting food and I noticed the “mud on my feet”.

Sleeping Bag Studios says, “Scott’s combining folk-song sensibilities with an upbeat Blues-vibe goin’ on, and certainly noticeable Pop-style hooks in both the music & vocal-melody that’ll prettttttttttty much grab the attention of just about everyone out there one way or the other.  I have been in the past, and remain right to this very moment, a huge fan of Kirby’s voice.  Dude’s a great brilliantly charismatic singer with tremendous tone and pinpoint precision – and he absolutely stuffs “Simple Life” full of soul, style, and skill from the microphone…all with such a remarkably organic, natural cadence, and energy that suits him extremely well.” 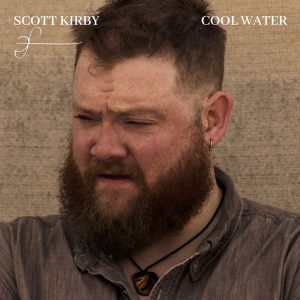 Coming up, September 20, Scott releases “Cool Water”, a contemporary blues tune about embracing life, and the people in it. With a slick, crisp blues riff as cool as cool water itself and Kirby’s signature on point gritty vocals, Cool Water takes you to church with authenticity. This righteous track is about how lucky we are to have each other.

Shortly after my wife and I were married, she was hospitalized for what we later found out to be Endocarditis- a bacterial infection that was affecting an abnormal bicuspid heart valve, in essence her entire cardiovascular system, including her kidneys. We spent our first thanksgiving in a hospital. I lost track of how many days in total we spent there. I had a lighter playing schedule and spent nearly every night with her in hopes we’d find answers to her condition and a means of getting back to our somewhat normal life.

After open heart surgery to replace the valve and help remove infection, there were many weeks of cardiac rehab and I think quite understandably, my heart and head were spinning. As her recovery was nearing, I felt an immense amount of gratitude for the fact that my wife was getting better. We would be able to have a family and a life with each other for at least a bit more time. Life is great, but it can be gone in the blink of an eye, so I do my best to show how thankful I am for its blessings.

Love is the source of our Blessings.  That’s no secret.